Posted on by Polly Murphy 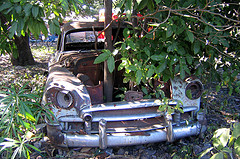 Car scrapping prices in Birkenhead can be confusing, but we make it so that you don’t worry about them! At Scrap Car Heaven we want your old cars and would never charge you to take them off your hands. We even offer a free pick up service. We are able to do this because we love your old cars and love to recycle them. We view our services as a great benefit to the environment and our customers appreciate this service. You see, when a car has reached the end of its useful life, many will just leave that old car in a field to rot away. This might not sound like a bad thing, but one must consider all of the toxic fluids in a car. From the material in a battery, to the old oil, many parts of an old car can be hazardous.

Recently just such a gentleman called us up to talk about his situation. For decades when one of his family’s vehicles had worn out, it ended up in an empty lot he owned in Birkenhead. Car scrapping prices had been going up so he was considering getting the old cars taken off his property. The problem was he had no way to move them. The years had rendered them inoperable, and he couldn’t afford to have someone come pull them out.

Just as he was about to give up he discovered Scrap Car Heaven. He was so pleased that we include a free pick up as part of our service that he scheduled a time for the cars to be removed as soon as possible. As we spoke with him we were sure to let him know that he would be receiving a de-registration certificate shortly after the cars were disposed of, absolving him from any future responsibility for the cars. The next time you are thinking about car scrapping prices in Birkenhead, be sure to give Scrap Car Heaven a call on 0151 647 8578.